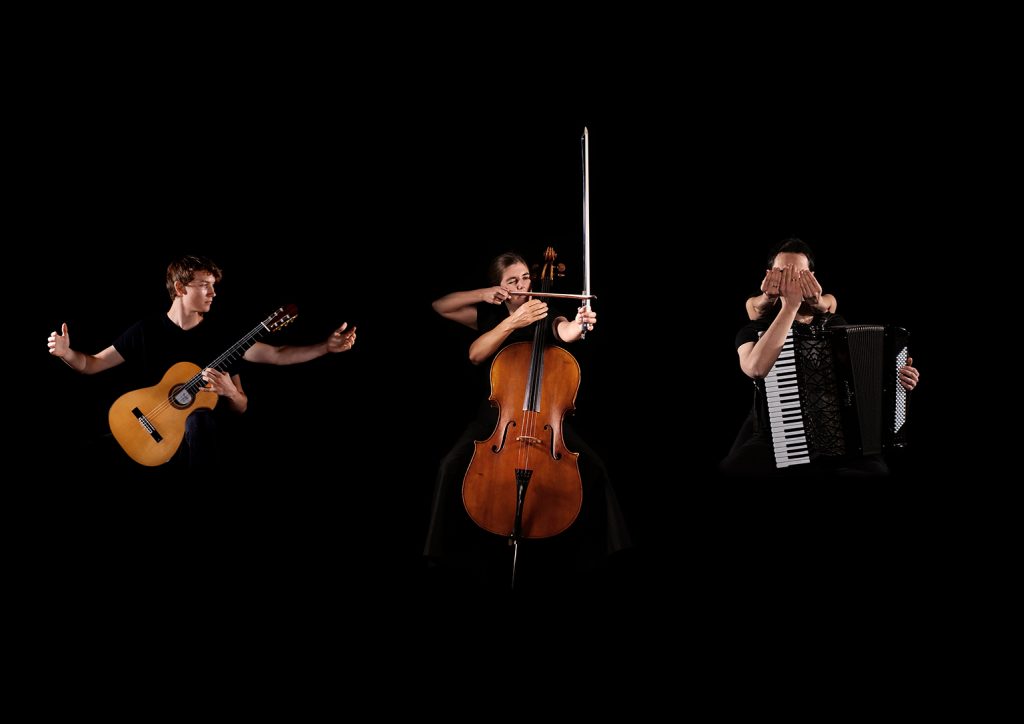 In Plato’s Symposion, his reflections on love, the original form of man appears ternary: male, female and androgynous. These originally four-armed beings were torn apart by the gods. In a multiplicity of sexual orientations and identities, they have been seeking union ever since.

In 4 Hände (four hands), with a single instrument, two people merge into a fourhanded being – two women, two men, and a mixed couple, following Plato’s pattern. What does it mean to cooperate in such a confined space? What impulses could this model provide for social interaction? Or for new forms of love?

The musical and scenic action of this polished work of instrumental theatre remain closely intertwined, requiring an extreme degree of controlled interaction. The visual inventiveness that both composers – also a four-handed double – bring to this collaboration is virtually inexhaustible.

In the first place, let me treat of the nature of man and what has happened to it. For our original nature was by no means the same as it is now. In the first place, there were three kinds of human beings, not merely the two sexes, male and female, as at present: there was a third kind as well, which had equal shares of the other two. For andro­gynous was then a unity in form no less than name, composed of both sexes and sharing equally in male and female.

Secondly, the form of each person was round all over, with back and sides encompassing it every way; each had four arms, and legs to match these, and two faces perfectly alike on a cylindrical neck. There was one head to the two faces, which looked opposite ways; there were four ears, two privy members, and all the other parts, as may be imagined, in proportion.

Terrible was their might and strength, and the thoughts of their hearts were great, and they made an attack upon the gods.

Thereat Zeus and the other gods debated what they should do. At last, after a good deal of reflection, Zeus discovered a way. He said: “Methinks I have a plan which will humble their pride and im­prove their manners; men shall continue to exist, but I will cut them in two and then they will be diminished in strength and increased in numbers; this will have the advantage of making them more profitable to us. They shall walk upright on two legs, and if they continue insolent and will not be quiet, I will split them again and they shall hop about on a single leg.” He spoke and cut men in two, like a sorb-apple which is halved for pickling, or as you might divide an egg with a hair; and as he cut them one after another, he bade Apollo give the face and the half of the neck a turn in order that the man might contemplate the section of himself and thus learn a lesson of humility.

After the division the two parts of man, each desiring his other half, came together, and throwing their arms about one another, entwined in mutual embraces, longing to grow into one. So ancient is the desire of one another which is implanted in us, reuniting our original nature, making one of two, and healing the state of man.

And when one of them meets with his other half, the actual half of himself, the pair are lost in an amazement of love and friendship and intimacy, and would not be out of the other’s sight, as I may say, even for a moment: these are the people who pass their whole lives together; yet they could not explain what they desire of one another. For the intense yearning which each of them has towards the other does not appear to be the desire of lover’s intercourse, but of something else which the soul of either evidently desires and cannot tell, and of which she has only a dark and doubtful presentiment.

Suppose that, as they lay together, Hephaestus should come and stand over them, and showing his implements should ask: “What do you people want of one another?” they would be unable to explain. And suppose further, that when he saw their perplexity he said: “Do you desire to be wholly one; always day and night to be in one another’s company? for if this is what you desire, I am ready to melt you into one and let you grow together, so that being two you shall become one, and while you live a common life as if you were a single man, and after your death in the world below still be one departed soul instead of two – I ask whether this is what you lovingly desire, and whether you are satisfied to attain this?”

There is not a man of them who when he heard the proposal would deny or would not acknowledge that this meeting and melting into one another, this becoming one instead of two, was the very expression of his ancient need.

And the reason is that human nature was originally one and we were a whole, and the desire and pursuit of the whole is called Love.