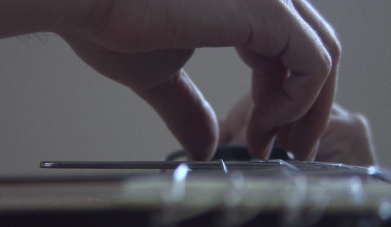 The guitar is retuned (3rd to 11th partial of A) and divided into several sections by preparation with capo and two metal spoons, which can be played separately. In this way, a non-standardised tonal system is created. With the help of contact microphones, the guitar sounds in the different playing sections are acoustically scrutinised and projected onto several loudspeakers in the room, moved and thus deterritorialised on a further level. For the audience, the guitarist is only visible in profile, so the performance turns into an instrumental music theatre, a choreography for two hands exploring the territory of the guitar.

The international jury judged Tobias Klich: “He is a true storyteller, a composer with maximum expressive potential. Klich’s music immediately grabs the listener. His compositional technique is consistent and leads to highly crafted, fantastic sounds.”

Among the thirteen compositions selected for the competition, Tobias Klich was awarded the prize: for an extended but thoroughly captivating sound study for prepared and amplified guitar and electronics, whose winding paths pointed to an underlying narrative just as much as the title: Murky green ritornellos when leaving the territory.