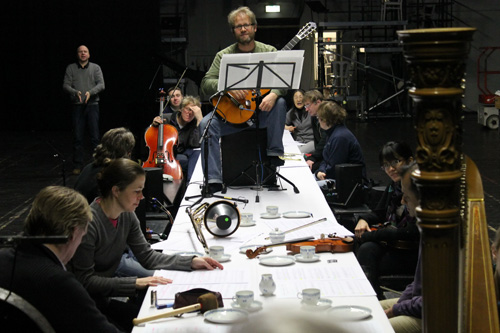 The piece PLAN P: an archaeology of silence undertakes excavations that do not penetrate the deep layers of pathologised and medicalised patients, but instead take a microscopic look at the speechlooseness of hospital staff. Tape recordings of conversations with doctors, carers and nurses from various psychiatric clinics as well as of a guided tour through an art installation in a psychiatric museum opened up maps of speech and silence, on the basis of which a text fabric was developed that confronts condensed zones of eloquent narration with stalled and abruptly interrupted streams of memory. The music tries to make audible what is not perceptible on the surface of the texts. What/who is “normal”, what/who is “sick”? Is it the guitar, on which there is no longer a normalised tonal system due to retuning and preparation, or all the other musicians who surround the guitarist in the room and play in equal, normalised tuning? Who decides on this? And: How can one even approach such a topic within art?

“[…] while Klich’s piece (with texts by Kathrin Franke) with two ensembles at a long table and a soloist positioned in between gains a highly tense scenic situation from everyday gestures. This is mainly due to the sound design of the prepared concert guitar (Jürgen Ruck), which at times sounds like brittle glass rods and is staged as a dominating event by a space-consuming sound direction.”

“For Plan-P – An Archaeology of Silence by Tobias Klich, black tables were arranged in the centre of the hall to form a long table and covered with white tablecloth. Porcelain was dished up from a clattering tea trolley that drove in. Members of the Ensemble Modern sat down at the table with their instruments. Violinist Jagdish Mistry put salt in his coffee cup. Finally, guitarist Jürgen Ruck took a seat in the middle of the coffee table: a symbol of the guitar player as a despiser of the bourgeois. A capo placed in the middle of the fretboard divided the strings into two different sounding halves and made it possible to play beyond familiar tonal systems. The texts whispered in the round table were by Kathrin Franke and dealt with a medication psychiatry that only silences instead of curing causes – another social utopian theme. Here, indeed, the attempt to fan the concern of music in the scene seemed to have succeeded.”

“The sonorities of classical instruments, rich in scraping and scratching noises, combine with whispered texts from the margins of society.”

“Madness has always run through art. In Romanticism, it leaves particularly broad traces – in the biographies of Hölderlin and Nietzsche, van Gogh, Schumann and Wolf and many others. It is only in the course of the 20th century, however, that madness is also used productively by art. Madness is now a fund of knowledge that is able to look beyond the normative. Seen in this light, it is not unusual when Tobias Klich takes us into psychiatry in PLAN P: An Archaeology of Silence. What is unusual is that he seeks out the healthy there, of all people, the therapists, doctors and nurses. With them he finds a language that can hardly articulate itself, he finds stagnations, half sentences, swallowed words and silence. The healthy people are not strong, they are helpless and stunned, they take refuge in empty phrases, evade and deny. Klich’s scenic chamber music transports us to a place where comprehension is but a collection of fragments. Distorted sound recordings of interviews and documentary texts assault us from all sides, barely moving sounds mingle with barely comprehensible speech, the soloistic guitar is fragmented into heterogeneous sections. It, which could offer unity and support, is itself torn apart and devoid of a reliable identity.”